Democrats claimed the Inflation Reduction Act would benefit ordinary Americans, but recent analysis indicates that those people earns less than $400,000 annually may wind up paying $20 billion of the new tax revenue it brings in.

Democrats claimed the Inflation Reduction Act would benefit ordinary Americans, but recent analysis indicates that those people who earn less than $400,000 annually may wind up paying $20 billion of the new tax revenue it brings in. 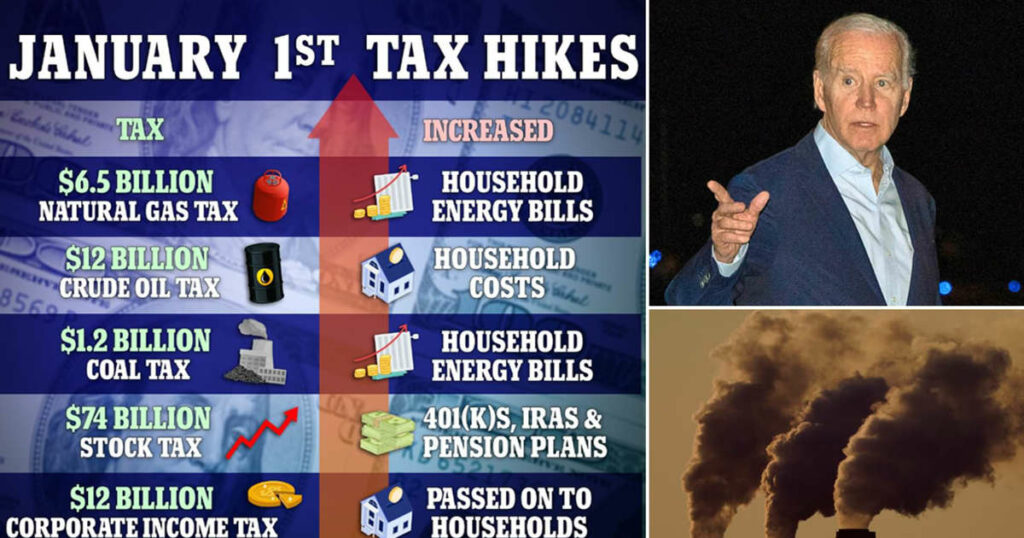 Democrats claimed the Inflation Reduction Act would benefit ordinary Americans, but recent analysis indicates that those people earns less than $400,000 annually may wind up paying $20 billion of the new tax revenue it brings in.

President Joe Biden signed the act into law in August, which includes $473 billion of new spending on climate and healthcare, yet there are serious concerns it will do little to reduce inflation. Middle-class Americans will pay more taxes which is in stark contrast to Biden’s pledge to keep the tax burden on those making under $400,000 flat.

Republicans oppose the legislation, claiming it would rise taxes on average Americans and not offer assistance in reducing soaring costs. The legislation includes $430 billion in spending, raises $737 billion over the next ten years, and is projected to reduce the deficit by around $300 billion. After the law narrowly cleared the ate 51-50 with all Democrats and Vice President Kamala Harris voting for it, it was passed by the House 220-207 on a party-line vote.

It raises $265 billion by permitting the government to bargain with pharmaceutical companies for cheaper Medicare prescription drug costs. $369 billion in climate provisions along with $64 billion in expansions of Affordable Care Act subsidies are expected to result in a 40% reduction in carbon emissions from prior levels.

Here Are the Cause Of Inflation

These are the tax increase that President Biden promises not to raise taxes for Americans making less than $400,000 per year, and administration officials have acknowledged that it violates this pledge.

Taxes are expected to increase by $6.5 Billion as a result of American oil and gas production. Democrats have decided to include this tax even though retail energy prices in the US are marked as a multi-year high.

According to the American Gas Association, this methane tax alone may cause a 17 percent increase in the average family’s natural gas bill. Biden administration has admitted that this type of tax, which increases consumer energy prices, goes against President Biden’s $400,000 tax pledge.

An additional 16.4 cents for every barrel tax on crude oil and imported petroleum products is expected to be passed on to purchasers in the form of higher gas prices according to some Democrats.

Additionally, the tax hike is linked to inflation, meaning that it will also climb along with inflation. The Joint Committee on Taxation (JCT), a non-partisan institution, estimates that this provision will generate $12 billion in taxes.

Democrats are advocating a 15% alternative minimum tax on the financial statement earnings of American companies reporting $1 billion in profits for the past three years.

According to the Tax Foundation assessment that this tax would drop GDP by 0.1% and result in the loss of 27,000 jobs.  The Congressional Budget Office estimates that this allocation would increase taxes by more than $225 billion. The coal industry confronts the heaviest burden of the book minimum tax, facing a net tax hike of 7.2 percent of its pretax book income, followed by automobile and truck manufacturing, which faces a 5.1% tax hike.

Democrats are recommending a new federal excise tax on stock buybacks, which is anticipated to lower the value of household nest eggs and retirement savings accounts, including 401(k)s, IRAs, and pension plans.

This tax may also have a detrimental effect on union retirement plans and make American employers at a competitive disadvantage with China, which does not have such a tax.

This tax may deter corporations from executing Stock buybacks that help to boost retirement funds, which would hurt retirement savings for the 60 million workers invested in 401(k) plans and the 58 percent of Americans who own stock.