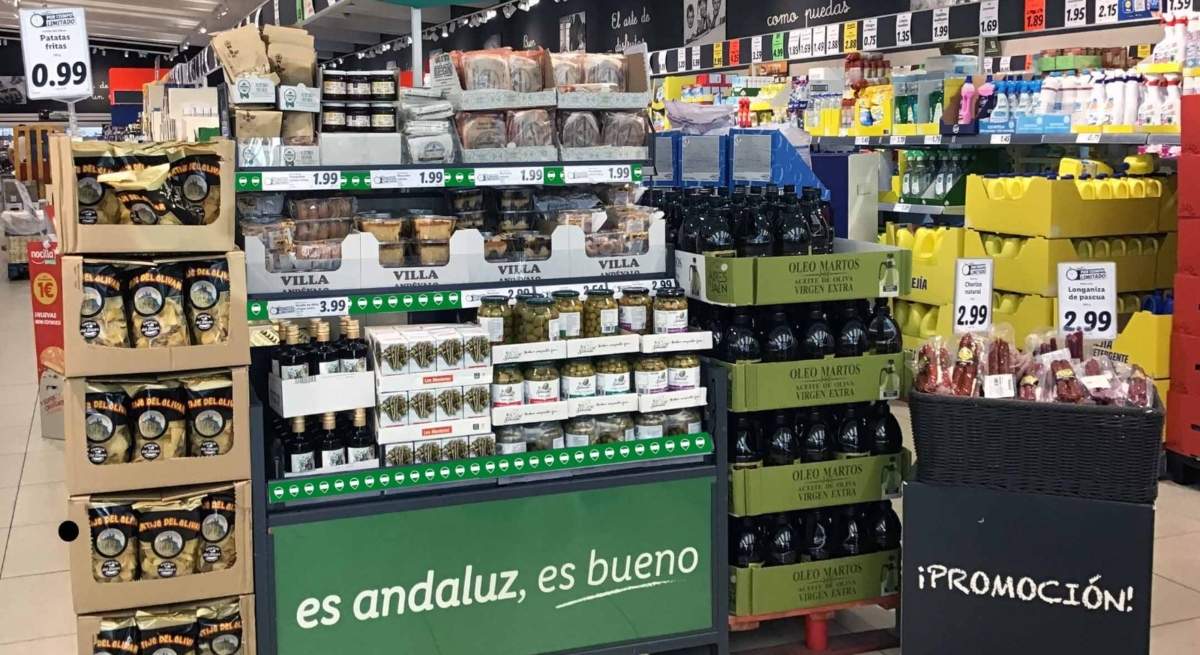 Lidl is launching an initiative this week to attract new Andalusian suppliers and support small and medium-sized local businesses, promoting the consumption of typical products from each of the eight provinces. The supermarket chain has recently reached agreements with twenty Andalusian suppliers (with whom it had not previously worked) to whom it has allocated more than 600,000 euros in the purchase of different regional references, which it markets and promotes these days in its nearly 130 stores spread throughout the region.

This Lidl campaign began at the beginning of this year, with a process of attracting suppliers, after the creation of a specific web page where local companies could present their candidacy to start a contractual relationship with the brand. Once the product tasting phase has been completed, the company has made a selection of twenty firms that stand out for being specialized companies and for manufacturing and distributing typical articles from each of the provinces .

The brand has chosen 5 suppliers in Seville from which it sells typical products such as orange, cinnamon and lemon cakes, anchovies in vinegar and olives , among others. In Córdoba, a total of 3 new suppliers, of which they put on sale beers, goat cheese and Iberian acorn-fed sausage. And, finally, in Jaén, Almería, Granada, Málaga, Cádiz and Huelva, another 2 suppliers per province, offering items such as Jaén PGI extra virgin olive oil, 100% natural tuna mojama, picos y regañás, wild asparagus, and oil and anise , among other references.

‘It’s Andalusian, it’s good’
Outside of this specific campaign, Lidl purchases regional products worth more than 1,550 million euros per year and markets more than a hundred typically Andalusian products in Community establishments under the ‘It’s Andalusian, it’s good’ seal, with which consumers can identify the origin of food while valuing the Andalusian primary sector.In addition, it buys more than 600 references in the region that it sells in its stores in Spain and Europe, where products such as beers, dairy products, cheeses stand out. , regional wines from the different DOs, among others.

Among the purchases of regional references that Lidl makes in Andalusia, those of fruit and vegetable products stand out . Specifically, during 2021, almost 80% of its total purchases in the community correspond to fruits and vegetables, including tomatoes, peppers, potatoes, melons and citrus fruits , among others, consolidating the supermarket chain once again as the customer number one of the Andalusian orchard.

82% of what it acquires in the region is dedicated to export
In addition, the brand has also become one of the main platforms for externalizing references in the Community, exporting 82% of everything it buys in the region.

Lidl in Andalusia
Lidl has been present in Andalusia since 1994 and currently has more than 3,000 employees, nearly 130 stores , two logistics platforms in operation (in Malaga and Dos Hermanas -Seville-) and another under construction in Escúzar (Granada).

Thanks to its activity, the company produces an annual impact on Andalusia’s GDP of 1,414 million euros (1.03% of the total) and is responsible for more than 30,300 jobs, between direct, indirect and induced jobs (1% of the total for the region), according to a study by PwC.